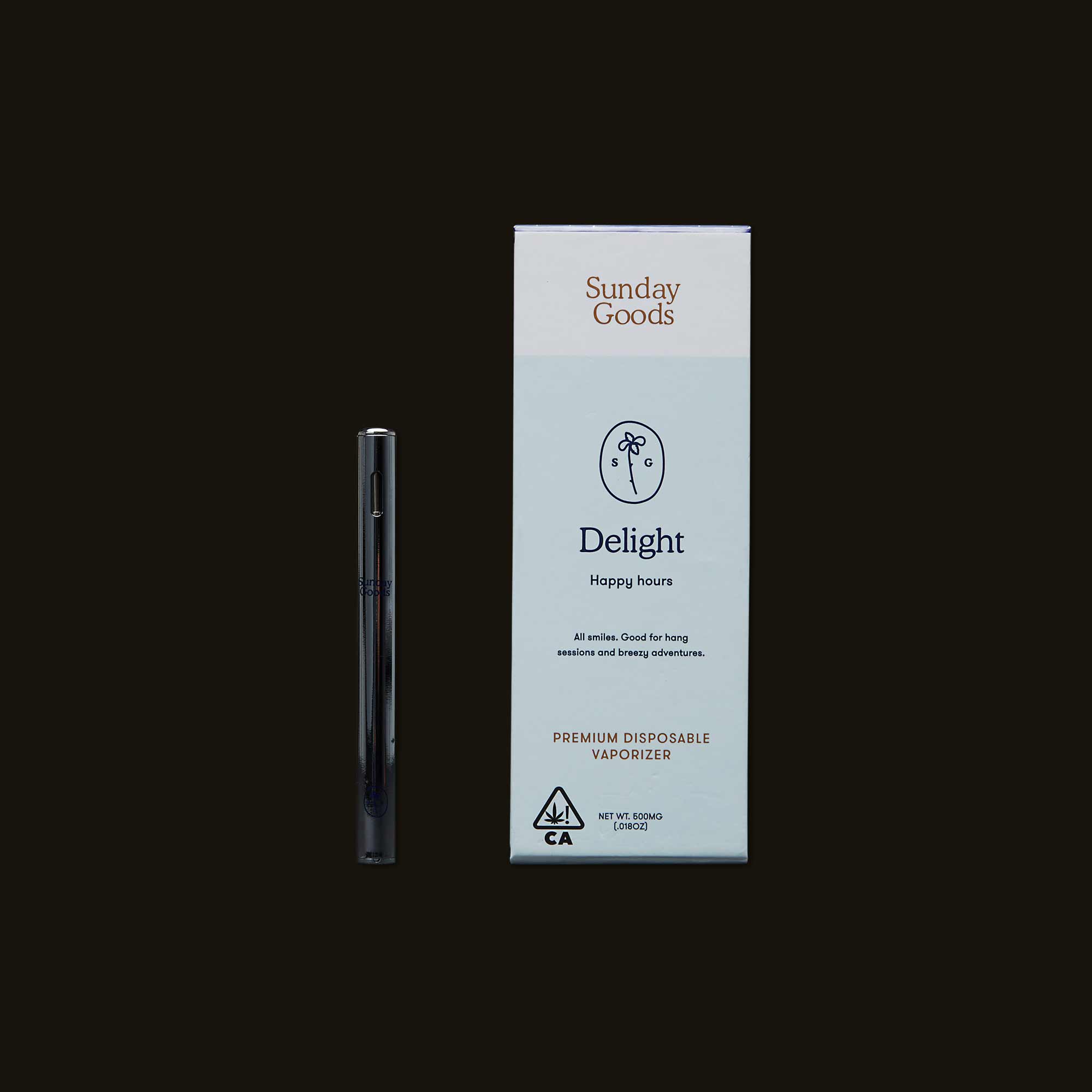 The Delight Disposable from Sunday Goods is an all-in-one vape pen with an incredible citrus and cream flavor similar to lemon meringue pie. The resulting high is often quick-hitting and short-lived with an excited haze in the head. Pick this up if you need to motivate a social buzz or a brainstorming session. It plays nicely with other Sunday Goods pens, too.

Ranked 93 of 231 in Vape Pens for feeling Relaxed. 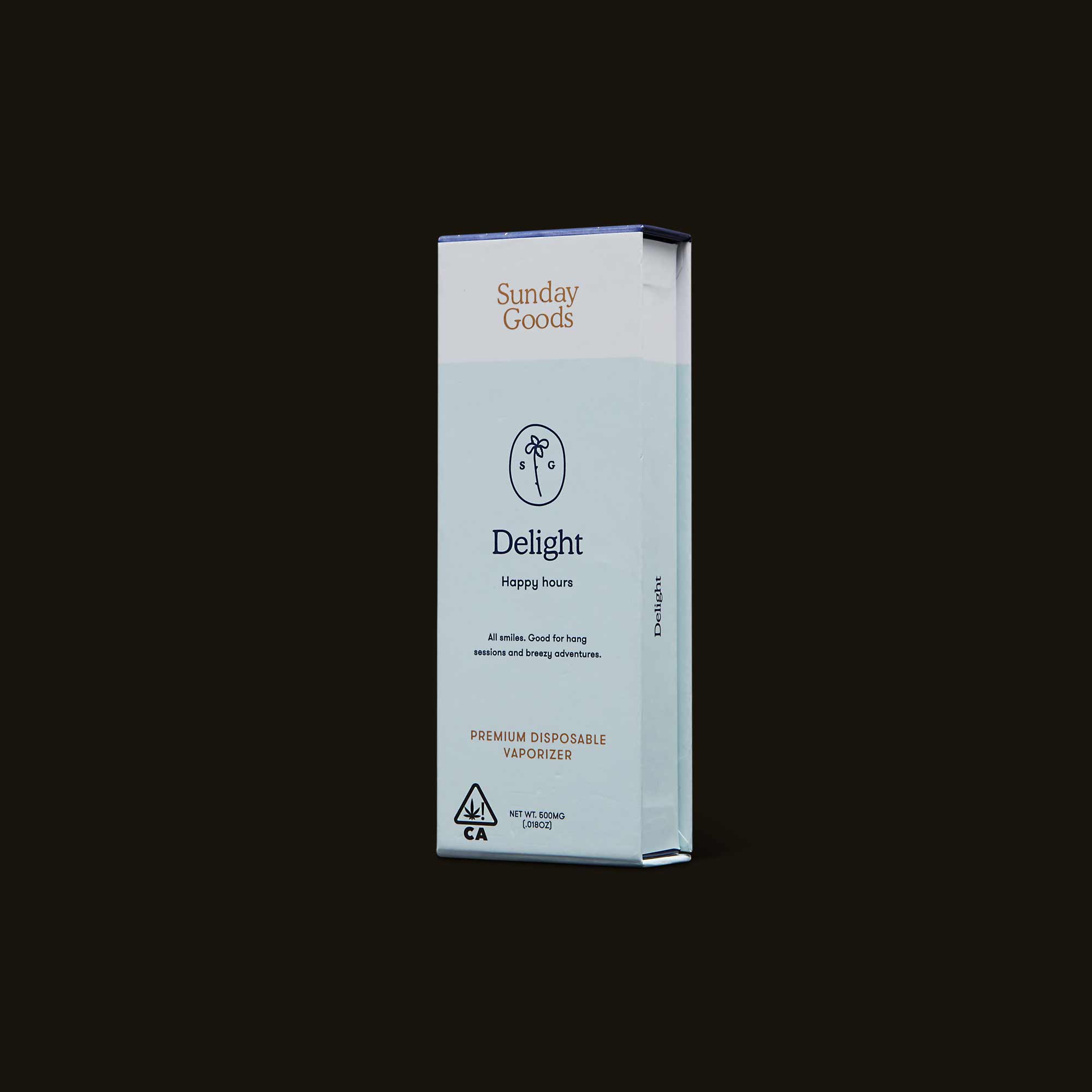 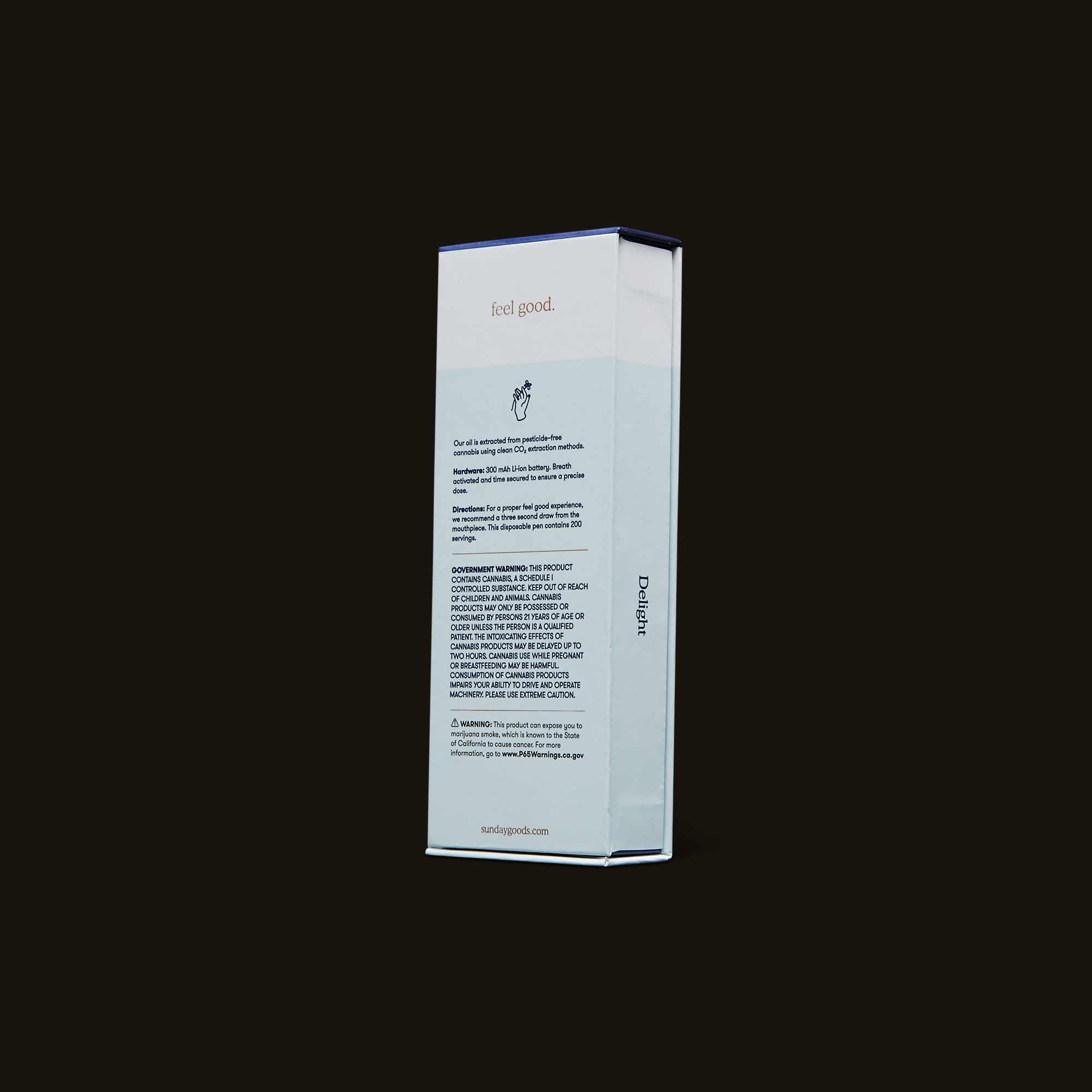 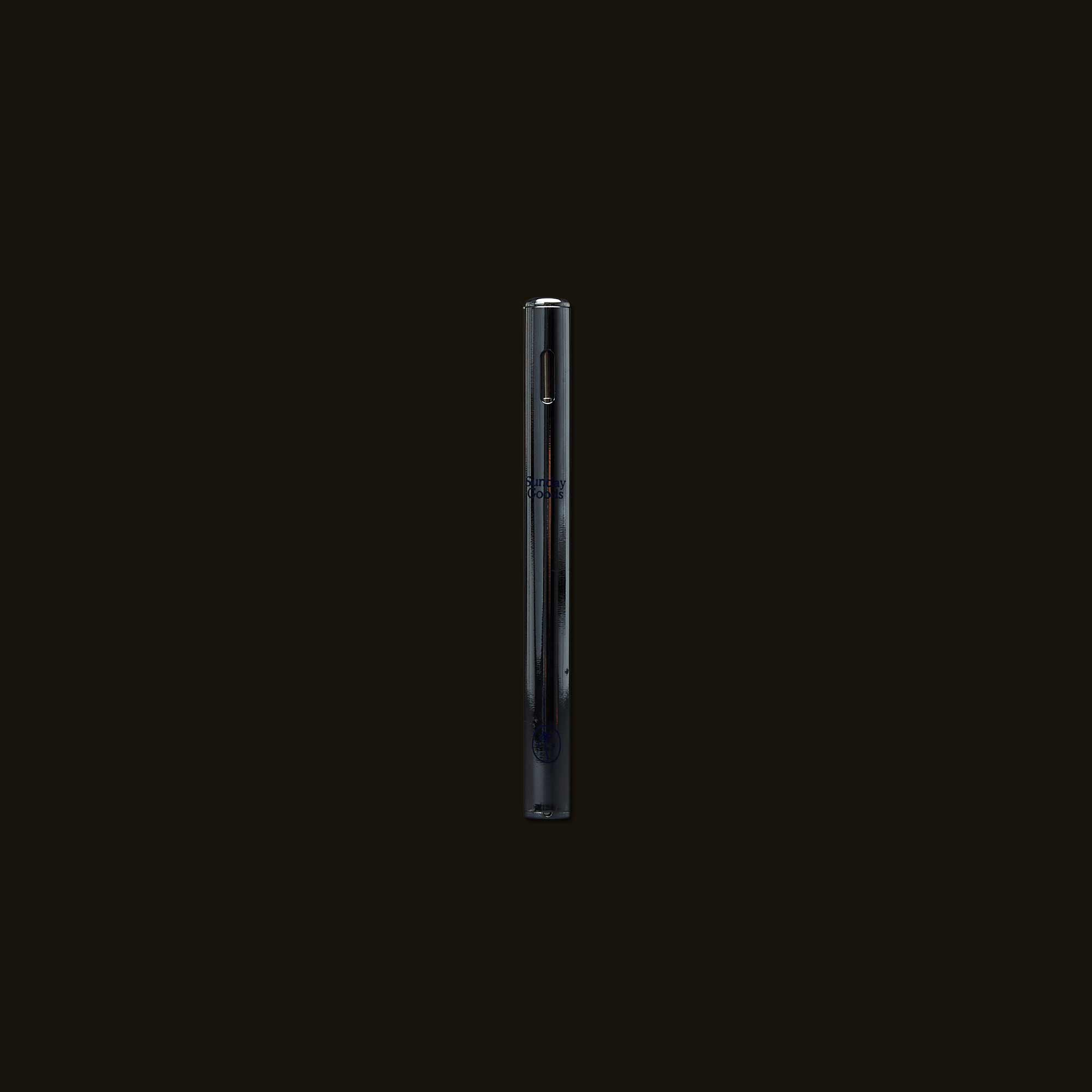 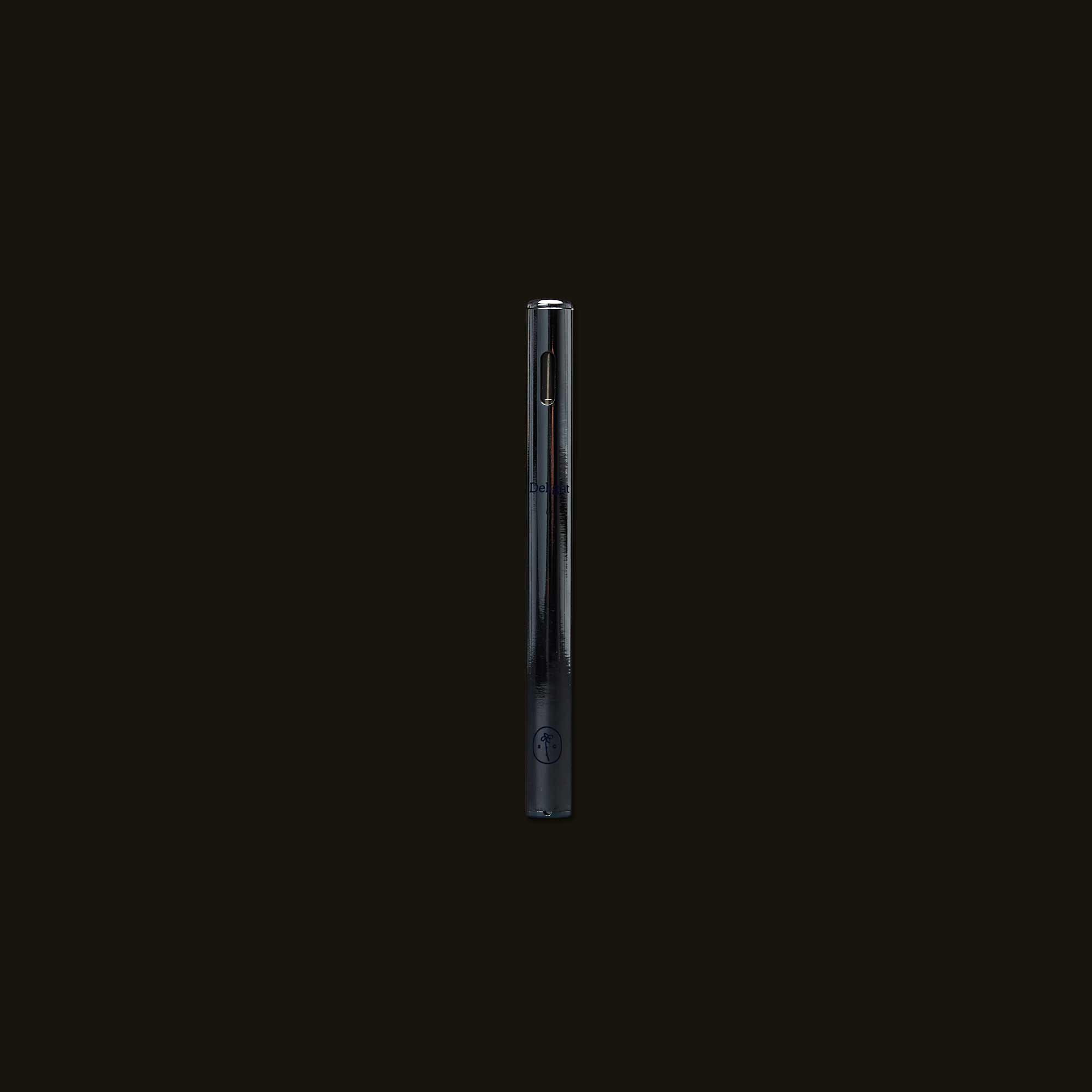 As our committee rates Delight Disposable , we capture their experience in real time through our ratings app and report everything back here.

The info below is based on at least seven sessions completed by Proper Cannabis Committee members.

Ranked 93 of 231 in Vape Pens for feeling Relaxed.


Quotes from the Raters

Feeling a nice mood boost and a burst of energy! Motivated to get out into the world and make things happen.

This Delight Disposable Is Sunday Good But Saturday Bad

A burrito in bed is one thing, but a screamo goth concert? Not so much.

IN REVIEW: As reviewer Samantha experienced the hard way, Sunday Goods' Delight Disposable vape pen (69.9% THC and 7.04% CBD) is great for relaxed evenings at home but not for energetic evenings out on the town. If you stick to stoner staples like snacks and ample couch time, this high is the best. But take it into an unfamiliar crowd with dubious vibes, and you might regret it.

Sunday is traditionally a day of rest, and this Delight Disposable from Sunday Goods is a great way to celebrate that. The first time I tried this vape, I chatted with my roommate, ate a burrito in bed, and streamed a whole bunch of Netflix. It was a classic mellow stoner day and a truly delightful one at that. But I’m not trying to repeat the same sentiment of, “Wow, this weed goes great with cartoons and food and bed!” Like, thanks stoner genius, we all could’ve guessed that. So I tried taking this Sunday Goods pen out for a night on the town, and I discovered exactly why it’s not called Saturday Goods.

I went to meet an acquaintance at a concert at Bardot in Hollywood. The venue was large and contained a confusing number of rooms. Since most of the venue was actually hallways, the non-stop bumping from strangers was both literally and figuratively jarring. It was just the sort of crowd situation that can normally make me anxious. I got a drink and my anxiety instantly increased thanks to the prices at the bar. I was hoping this delightful disposable would help me take the edge off that social awkwardness so I could avoid draining my wallet at the bar. But sometimes we all make miscalculations.

While vapes are certainly under some scrutiny right now, I felt a little better that this one uses a CO2 extraction method, which is one of the cleanest available. This 500mg disposable contains a 10:1 ratio of THC:CBD and a formidable potency of 69.9% THC and 7.04% CBD. It had a pleasant citrus and vanilla flavor, though slightly perfumy with a hint of chemicals. I wasn’t aware of the recommended dose later, which is a short three-second pull, so I definitely took more than that.

“One person’s favorite rock band can be another person’s Nickelback.”

It claims to provide a seemingly contradictory mix of effects that include both energy and calm. While I did feel a calming effect that helped assuage my irritability, it seemed to be more physical than mental. Perhaps it was the CBD receptors in my body being satiated? I wanted to plop in my bed instead of standing in a crowd. I did not feel the energy, but maybe all the promised pep went into my mind, as I began spinning a mad amount of paranoia. I was overly aware of every person around me. What’s his deal? Why is she standing so close? Who stands in the middle of the stairs like that? How is that not a fire hazard? Where are the bouncers, and also, do they hate me? No matter how hard I tried to relax, I just could not get into a mental groove.

When the last band finally started I thought I’d finally be able to chill into the musical groove. That’s when I learned I should never blindly trust a friend’s band recommendation, because much like cannabis strains, they affect us all differently. One person’s happy sativa is another’s paranoia madness, and one person’s favorite rock band can be another person’s Nickelback.

I hadn’t realized this band was on the goth end of the screamo rock spectrum and was not expecting the onslaught of sound that followed. While the singer was very talented and had a lovely voice reminiscent of Evanescence, the volume was a bit too intense and the lyrics were depressing AF. The rhythm section was majorly depressing, too. As a fellow musician and notable “beat bitch,” out of sync and dissonant music is practically a PTSD trigger for me. And since weed usually makes me even more sensitive to sound, it felt like torture, and not in a sexy leather S&M way.

“Some things are classic for a reason and some things should not be messed with.”

As soon as the band ended, I pretended there was some sort of emergency and ran out. The only real emergency, however, was the uncomfortable mix of my sensitive high and the angst in the room. Had the vape aggravated my social anxiety? Or just make me too empathetic to deal with the depressing, angry goth vibe? I felt so much better after I got home to a few slices of pizza and my TV. There was a subtle, slow comedown and a lingering “stoney” feel even hours after I had puffed. It was not enough to feel intrusive, but I definitely zoned out painting a million layers of nail polish for about an hour longer than I thought I was.

This high finally hit its stride when I hit my bed. I’m pretty sure that’s what THC:CBD actually stands for: Take Home Cannabis: Crawl in BeD. Some things are classic for a reason and some things should not be messed with. This Delight Disposable has such a mellow, lazy vibe, it’s more suited for a proper Sabbath Sunday than a Black Sabbath night.

Be the first to review Delight Disposable from Sunday Goods and help others find their high.