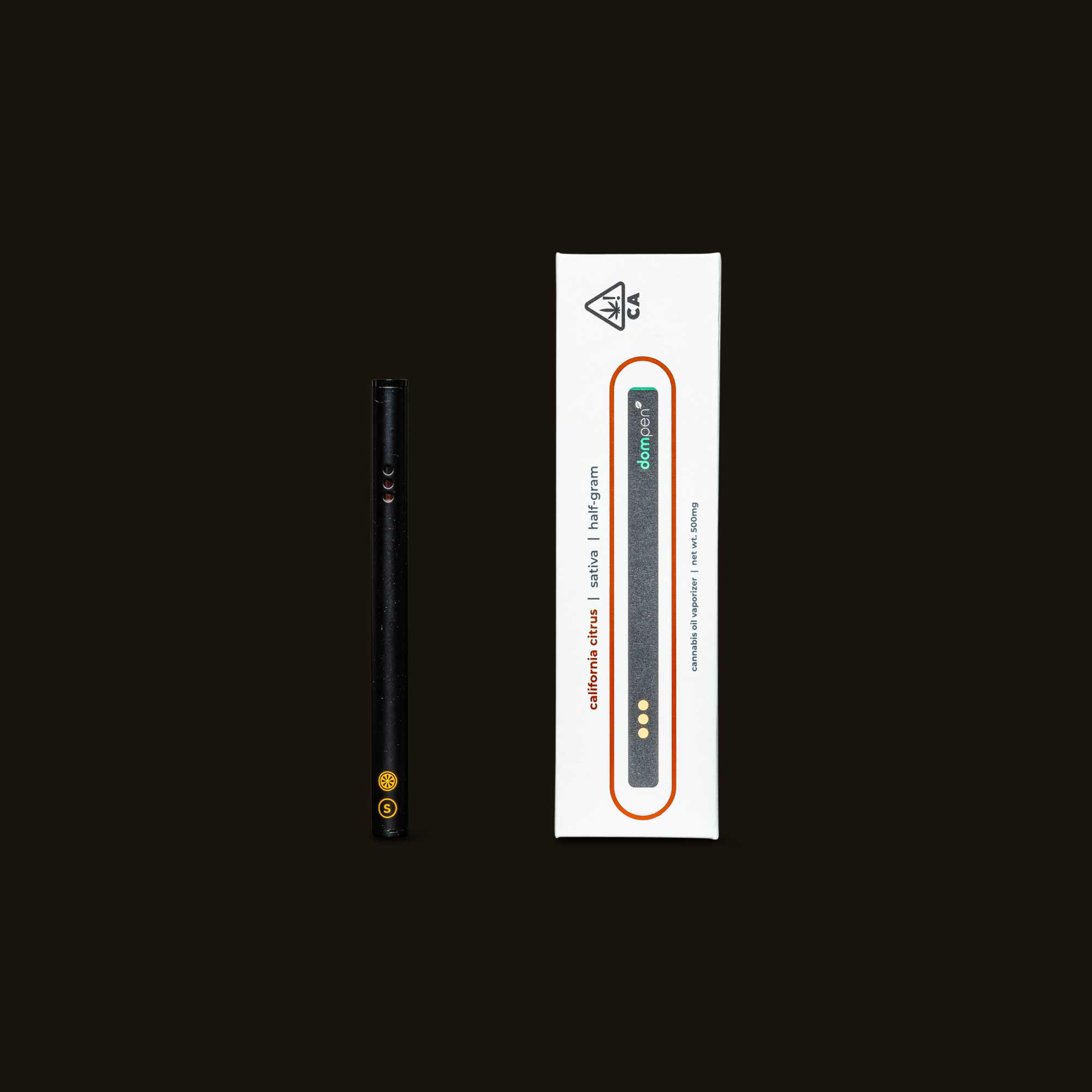 California Citrus by DomPen is a disposable vape. It comes ready to hit with a phenomenal creamsicle flavor and clean, comfortable vapor. The high can come on quickly with a subtle, happy head buzz and ascend until you're entirely stoned (depending on your dosage). The major side effect is in the eyes, which usually end up dry and squinty. We suggest keeping this kind of pen on you if you want to prolong an existing high or hit it for a quick mood boost.

Ranked 94 of 194 in Vape Pens for feeling Relaxed. 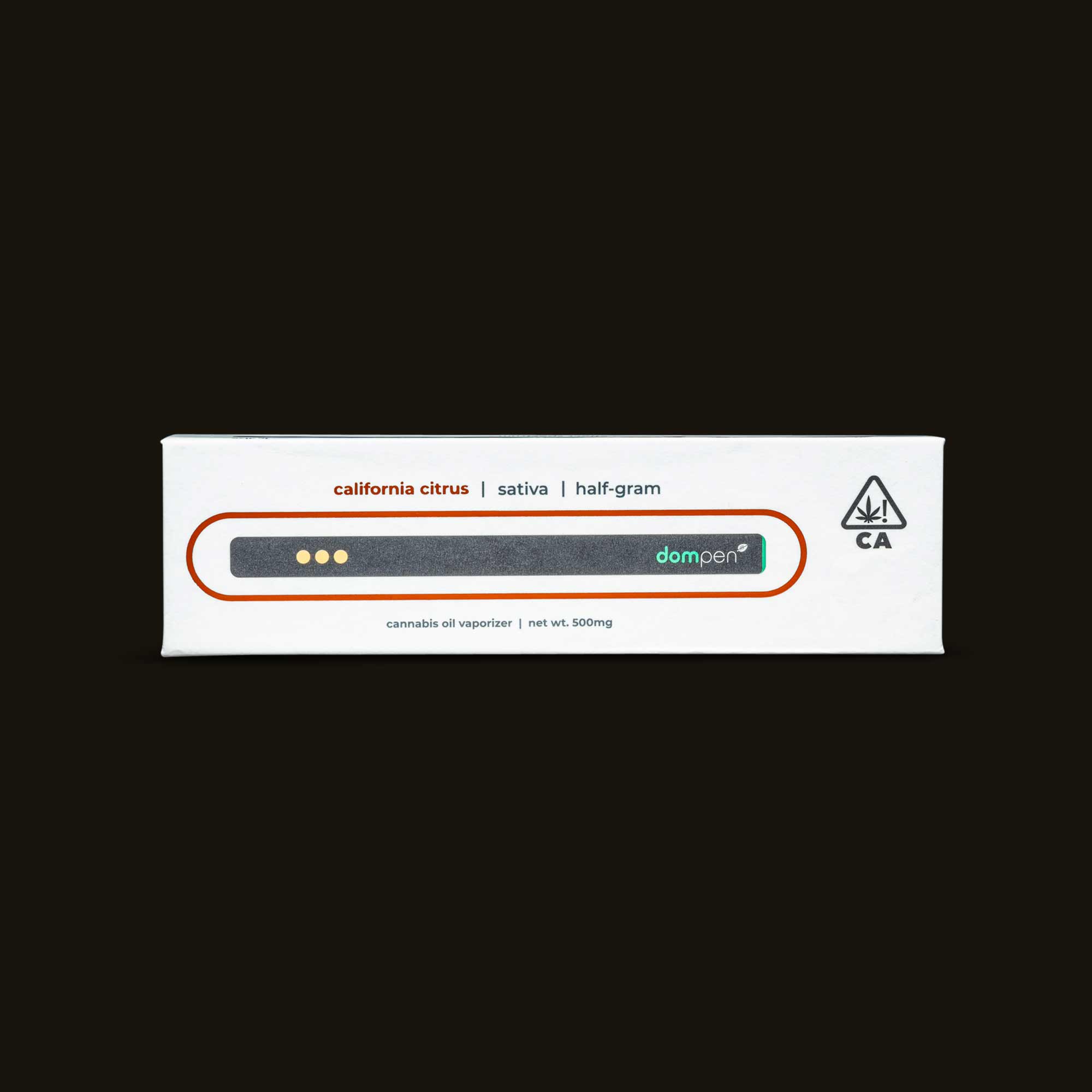 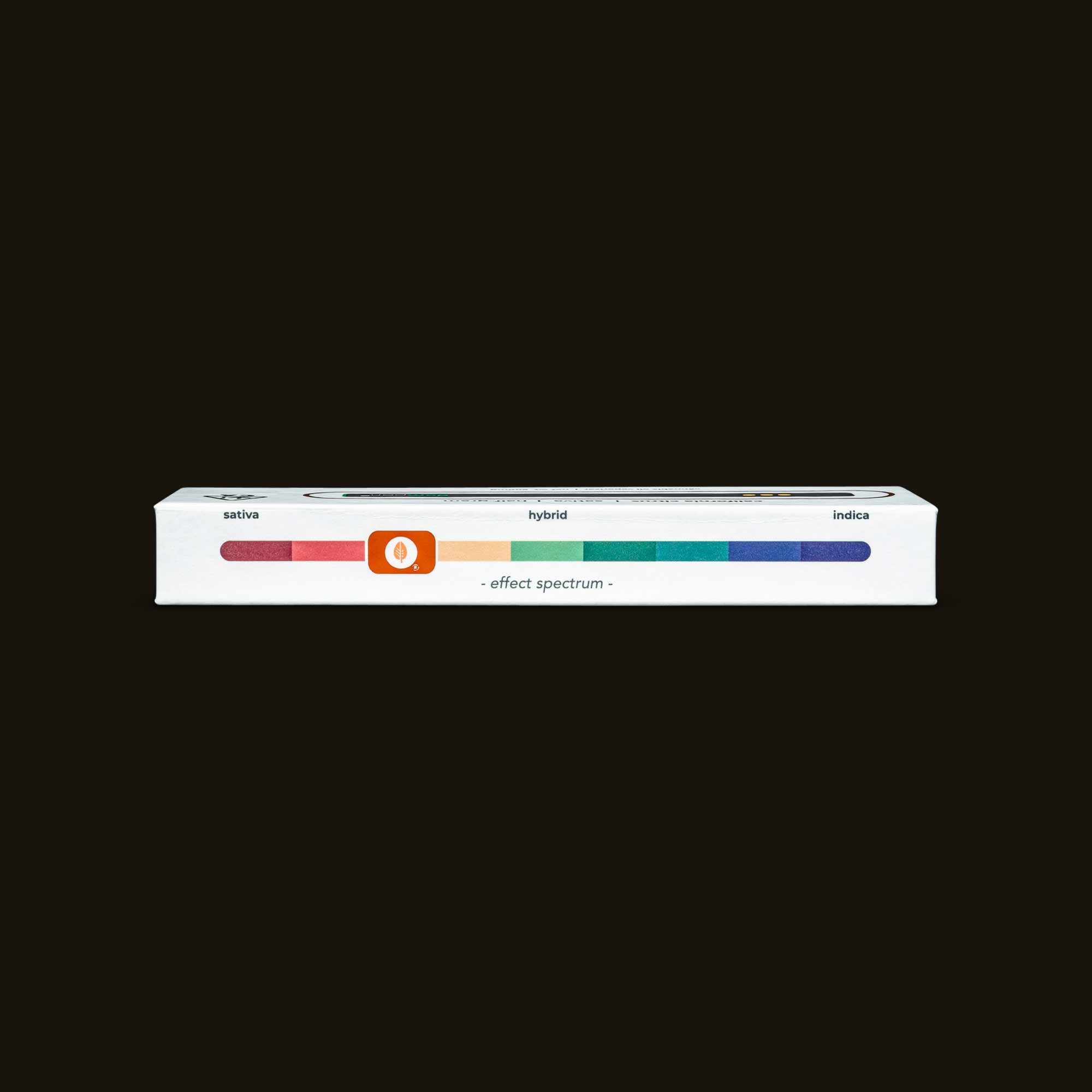 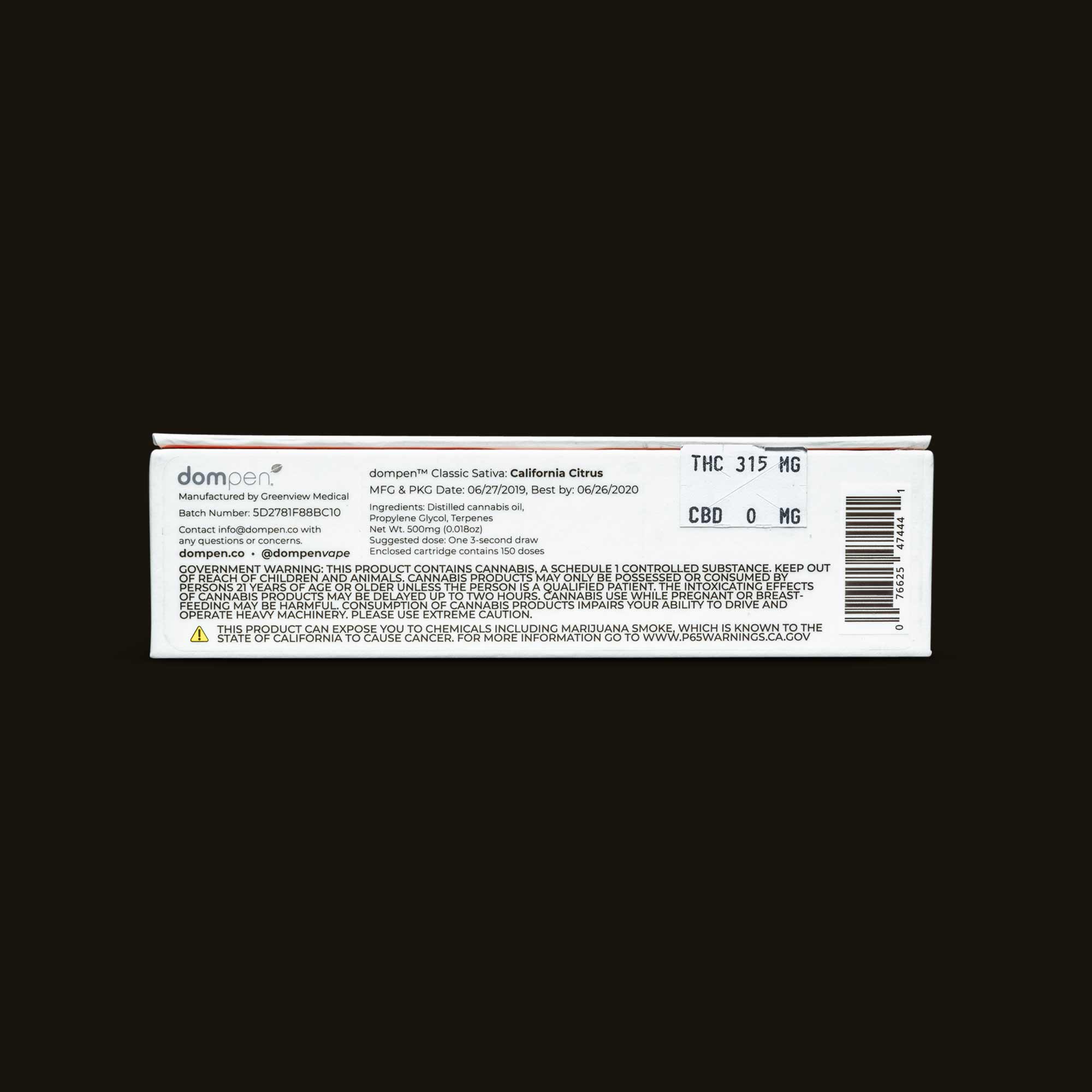 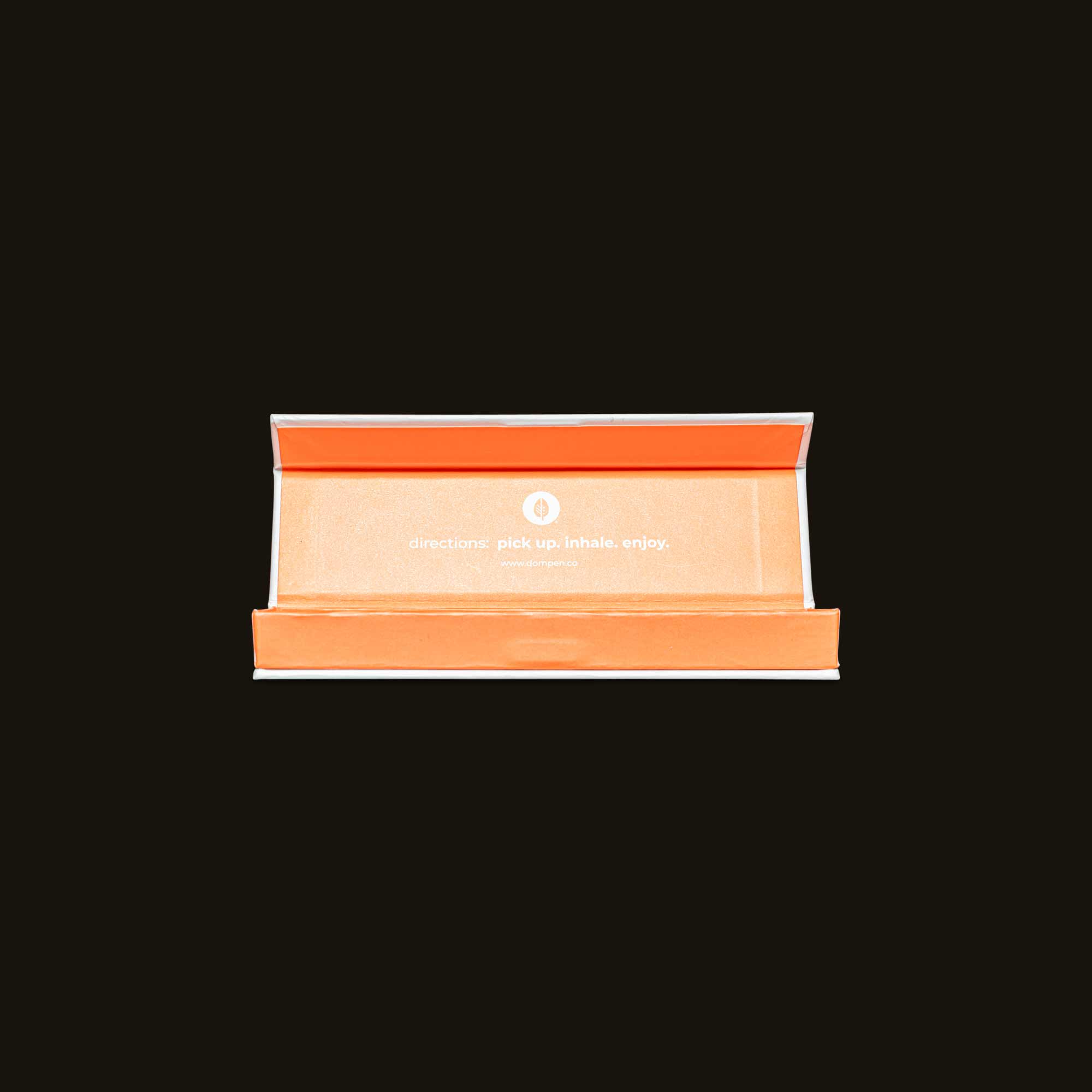 As our committee rates California Citrus Disposable, we capture their experience in real time through our ratings app and report everything back here.

Ranked 94 of 194 in Vape Pens for feeling Relaxed.

The Pen Of My Dreamsicles

With a nostalgic flavor and hopeful vibes, this pen pulled me out of a post-disaster slump.

My best friend burned my apartment down while I was in Europe over the summer. Well, not all the way down, but enough that I’ve had to spend the last few months living with my parents while insurance pays to rebuild it. In addition to losing treasured possessions like dried flowers, sage, and fur coats (smoke damage is a bitch), moving back home at 29 is a fucking bummer. Aside from daily wakeup knocks at the crack of dawn for no apparent reason and constant technological issues that need assistance in and around my dad’s computer, an overwhelming sense of failure has started to taint my otherwise normal anxiety.

“The plan: go camping alone for at least three days.”

The morning my mom cheerfully asked me to switch out an old toilet seat, I packed my car. The plan: go camping alone for at least three days. Visions of serene introspection by an open fire, silence, and whiskey swirled through my mind. I packed some flower, my new DomPen (a disposable vape I was to review), no food, not enough wood, and my tiny Shih Tzu named Trina. We hit the road, heading to a campground on the beach on the central coast of California, somewhere between Ventura and Santa Barbara.

As a weed writer, I’ve watched disposable pens explode into the diarrhea, gaining increasing popularity as legality changes the market from an opaque drug subculture to a streamlined medicinal space geared towards new users. While cartridges will always have their place, disposables are the future, preferred by many for their simplicity and convenience. The charger, cartridge, and battery set up seem almost archaic at this point. Instead of carrying around a fanny pack of vape accessories, you just have the pen. They can’t die and are perfect for travel. While I hold reservations about the amount of poopoo kaka they produce, cartridges aren’t biodegradable either, so you’re going to lose one way or another.

Arriving at the beach campground was disheartening. When I used to teach surfing at this spot as a teen, it would be largely empty most of the time. This time, however, there were people everywhere. I managed to get a good spot on the water, with only the unoccupied side of an RV facing me. I set up the tiny tent I’d bought from Walmart, my cooler, and a little blanket I tie-dyed. Suddenly bored, I began hitting the DomPen.

“The flavor was so nostalgic, so recognizable, I almost had to stop myself from screaming, 'Dreamsicle!'”

The headache I procured from mai tais the night before immediately subsided. Though the 500mg sativa pen (62.5% THC) is dubbed “California Citrus,” the flavor was so nostalgic, so recognizable, I almost had to stop myself from screaming, “Dreamsicle!” It was one of the best flavors I’ve ever encountered in a vape, and it was delicate, sweet, and smooth. Flushed with energy, I took to making my campground slightly less sad, then went with my dog for a walk on the beach. Hours later, I found myself in a bikini waxing my mustache and listening to Mariah Carey while drinking a Coors Light. Somewhere between the squealing vocals of “Heartbreaker,” I thought, I’m high, happy, and not tired. Is this my favorite vape of all time?

Around sundown, some friends stopped by my campsite with burritos and beer. After passing it around, they confirmed that yes, it’s one of the best vapes anyone has ever tried. After a few hours of loudly sharing fart stories about my loud, flappy butt and generally creating the opposite environment of the serene introspection I’d anticipated, the giant RV shielding my tiny tent from the rest of the campsite was asked to turn around by a park ranger. Suddenly, my private beach cubicle was shared with a middle-aged fireman and his wife, Deborah, both of whom had just heard everything. Understandably, they were palpably wary of their bizarre new neighbors. An awkward hush descended upon the crew. My friends packed up and left, and I realized I was all but out of firewood. As the moon rose and the campground settled into sleep, my fire went out completely. It was 10pm.

Bored, cold, and alone in my tent, I decided to go for a late-night beach walk. It was then that true tragedy struck. As I unzipped my tent, my flashlight revealed the ground was crawling with more cockroaches than I’d ever seen in one place in my life. Crawling over one another, over my outdoor blanket, my shoes, everything. I’m not one to freak on bugs, but this was another level. I screamed in that silent, truly terrified way. Jolting back into my tent, I zipped it shut. Adrenaline made sleep impossible.

Assuming the pen would wake me up further, I feverishly smoked some of the indica flower I brought. Instead of putting me to sleep, the indica backfired, spiraling me into a bug-based bout of total paranoia. Every itch was a roach. Every outside sound was a murderer taking a dump. After what seemed like an eternity of hell, I located the DomPen in the darkness, desperate to pass the fuck out. I took a number of hits big enough to make me cough, annoying the shit out of my dog. To my surprise, I was lulled to sleep almost immediately.

“Like the waves, I felt an energy that was wild, clear, and alive.”

The cold air of dawn snapped my eyes open. Though I had no idea how long I slept, I felt rested and okay, a wild improvement from the paranoid mess I’d gone to sleep as. Feeling an urgent need to pee, I unzipped the tent gingerly. A few remaining cockroaches scuttled off the blanket into the dark rocks holding the shore in place. The air felt good. People milled about. I let out a big fart into the sea breeze. I hit the pen again and got a coffee from the general store.

Still avoiding the horrifying infestation my campsite turned out to be, I went to the ocean. My dog dug holes she thought were big as the sun rose over the mountains separating the valley from the sea. The tide was coming in fast. White water roared. Like the waves, I felt an energy that was wild, clear, and hep-c-free. If this had been a cartridge pen, I’m near-certain it would have died in the middle of the night and I wouldn’t have slept a wink. The sun beamed on the ocean in columns, brightening a new day. After all that darkness, the future felt hopeful.